The Rise and Fall of Optimus Reim: Will James Reimer Return as a True #1 Goalie?

It's a memory that remains all too vivid for many of Leafs Nation. 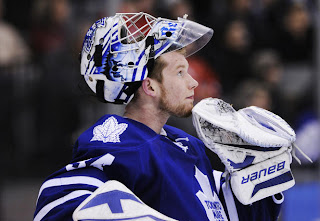 We remember watching the repeating replays of Brian Gionta's supposedly unintentional clip of James Reimer, our hopes for the season hanging in the balance. Wondering if this was the end to a young promising season, we watched as the trainer rushed out toward the Leaf goal and had insult added to injury as oft-obtuse colour commentator Glenn Healy suggested that Reimer was "putting on a show".

He 'sold it' so well that he would miss over 2 months in rehab and never be the same for the rest of the '11, '12 season. The slow fall of the Leafs season from the heights of screenshots of first place overall to second last in the east was marked by reoccurring instances of suspect goaltending from Jonas Gustavsson and an injury plagued James Reimer. While the Monster was able to provide some solid, even spectacular goaltending at times, his performances were all too often marred by one, or multiple weak goals. Arguably the worst of these came in overtime on a shot wide, which caused a minor explosion amongst Leaf fans on Twitter. Not enough can be said about how much these goals can demoralize teams, and on more than one occasion it seemed to suck the life out of the team as a whole. With the youth of the Leafs last season, the effect the play of the starting tandem had on the team seemed to have been amplified, and vice versa. An all-too -familiar catch-22 for long suffering Leaf fans appeared yet again as the team, lacking confidence in their goalies, were choked for offence, putting more pressure on the net minders and reducing the margin for error. With save percentages habitually dipping below the .900 mark, the future in the crease looked considerably dimmer at the conclusion of last season.

Now if you’re a Leafs fan reading this, you're probably depressed. I was too. But nothing was ever gained from dwelling on the negatives, and with that mindset I want to explore the possibility of James Reimer having success between the pipes for the Leafs next season. While rumours swirl regarding the imminently former Canuck goalie Roberto Luongo, Brian Burke has, to this point, stood his ground on the trade front and affirmed his previous statements of believing in Reimer as the Leafs #1 guy. Despite the brief emergence of Ben Scrivens, whose play toward the end of last season was likely good enough to secure a backup spot this coming year, Burke's lack of action places immense pressure on Reimer.

With injuries plaguing both J.S. Gigure and Jonas Gustavsson throughout the 2010-11 season, the door was opened in mid-December for Reimer to make his NHL debut. He faired quite well in his rookie season posting 20 wins in 37 games and .920 SV% including 4 shutouts. His play instantly endeared him to Leafs Nation who, never lacking in creativity, donned upon him several nicknames including Optimus Reim, Reim Time and The Reim Minister of Defense. This popularity even led to him being honoured in song by Barilkosphere legend Bloge Salming with the hit "Reimer".

With the offseason departure of J.S. Gigure, Reimer got the vote of confidence from both G.M. Brian Burke and coach at the time Ron Wilson and slid into the starter position for the beginning of this past season. In a season whose beginning seemed too good to be true, Reimer seemed to be avoiding the sophomore slump considered common for skaters and goaltenders alike, managing 4 wins in the first 5 games. However that was as good as things would get for twenty-four year old Manitoba native, who would miss eighteen games through October and November and be in and out of the lineup throughout the rest of the season, finishing well short of his rookie season stats at a .900 SV%. Now since Reimer has never had a significantly long stretch of success, you may wonder why I think there is cause for optimism. First and foremost, his full recovery from last year's 'upper body injury' in addition to Ben Scrivens' lack of experience should allow Reimer extended periods of starting time. While a goaltending tandem where both goalies are constantly vying for the starting job can occasionally work, Ron Wilson's seemingly incessant switching between the Monster and Reimer seemed to allow neither to get in a confident rhythm last year. Symptom free since early June, Reimer has been training in Kelowna B.C, and is looking to drop a few pounds according to his interview with David Alter. In addition to his regular strength training Reimer has been specifically targeting his neck muscles in an effort to prevent the injury suffered against the Habs early in the year, initially thought to be a concussion, from happening again. Further reason for hopefulness can be found in the attention devoted by the mainstream media (MSM) to Reimer's great character and positive presence in the locker room. Noticed and mentioned by GM, coaches, and teammates alike, his ever-present wide easy grin portray a laidback personality that, combined with elite level competitiveness, could be exactly what a young goalie needs to thrive as a #1 goaltender in the biggest hockey market in the league. Finally, on a team that struggled to maintain any sort of positive consistency last year, Reimer seemed to bounce back well. For example, 6 out of 7 times he posted a SV% less than .850 in a game last season, he followed it in the next game with a SV% over .900. While nothing about that stat is particularly spectacular, it could be argued that in doing so Reimer provided his team with a chance to win every game following an especially poor outing.

So the question remains. Which James Reimer will we see come training camp in September? Call it the hopeful optimism of a fan, but I think it'll be one ready to succeed in the #1 role for the Leafs.
Posted by Sam Gamper at 15:59

Sam Gamper
The Center of The Hockey Universe
A life long Leafs fan who shares a down-to-earth perspective on the team and the game in general. Has played every EA SPORTS NHL game since '95.